This week, two charities: CHT Home Base and Gardening Leave, transform the lives of up to 36 veterans at a supported housing unit close to Wormwood Scrubs in East Acton, London. 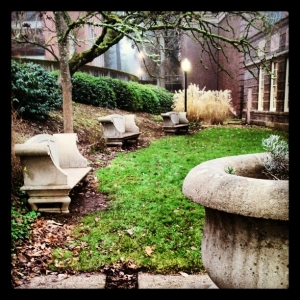 CHT Home Base is a charity that provides housing and therapy for ex-service veterans while Gardening Leave (which will work with the veterans to embrace the NHS 5 steps to mental wellbeing) caters to the hurt of veterans with mental health issues of conflict by providing horticultural therapy.

Although, It is uncommon to see charities and commercial companies working together to create green space for troubled armed forces veterans in the urban brick jungle.

“Creating green space for troubled armed forces veterans results in a garden that’s more than the sum of its plants.”

According to the Guardian:

“Within a few hours of the garden being built and planted, Bill was cutting rosemary to use in the lamb he was cooking that night, Steven was out there sitting in the sun and counting bees (yes, that quickly), two others had called in from one of the other CHT residences to meet and share thoughts, and Sam was busy watering.”

It would be very vital to water the plants as the advantages of watering is “taking responsibility”.

This will foster observation, adhering to a routine, dealing with disappointment, dependency, being kind and careful, using the correct implements and helping with concentration which are benefits for memory and judging distances.

According to one of the beneficiaries’, Bill:

“This was a nasty tarmac pit and now I come out here and my mood changes – it’s a real lift, it makes us all feel happier and stronger.”