Too many hospitals are coasting along, settling for meeting minimum standards, according to the health secretary.

In a speech on Friday, Jeremy Hunt attacked a culture of “complacency” and “low aspirations”, which he believes is holding the NHS in England back.

He said while there is a concerted effort to tackle failing hospitals, there should also be a focus on “mediocrity”. 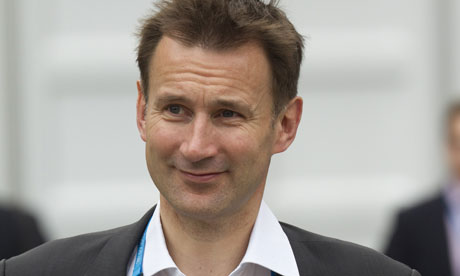 Mr Hunt’s comments come a month after the problems at Stafford Hospital were laid bare.

The final report of the public inquiry into the scandal, published at the start of February, attacked the way the system protected corporate self-interest rather than putting patients first. The warnings have already led to investigations into 14 hospital trusts with high death rates.

The health secretary made it clear in his speech that he is not saying the vast majority are mediocre, but according to sources his words are aimed at a significant bulk of those plodding along in the middle.

It is commonly said about a 10th of hospital trusts are failing, although double that are actually not meeting all the essential standards set out by the Care Quality Commission.

Sources said Mr Hunt’s words were aimed not at those that are failing minimum standards or waiting time targets, but the bulk in the middle that were not excellent and not poor.

He singled out Walsall Manor, a hospital in the West Midlands, which has turned itself around after faring badly in the national patients’ survey two years ago. The hospital decided to carry out one-to-one interviews with 100 patients to find out what they thought of their care and the staff that looked after them.

Jo Webber from the NHS Confederation:

People come to do the best they possibly can for patients.

We get critical and positive responses. It gives us a simple, clear way of understanding how we are doing.

There is a malaise in the NHS which has allowed mediocrity to become commonplace.

We hear from patients every day who are not happy with their care. I am not talking about the really bad, just those that are not putting patients first.

[It’s] no good for ministers to blame hospitals and staff when it is they who have thrown the whole system into chaos with a huge re-organisation, which has siphoned £3bn out of front line care.

Hospitals across England are on a knife-edge and they need a government that provides support rather than points the finger.

From one perspective I absolutely agree with him, of course we don’t want mediocrity.

But to make sure that does not happen we need to invest in staff. When we won one gold medal in the 1996 Olympics we started investing in our athletes, rowers and cyclists.

To achieve gold medal standards in the NHS we need to do the same. It requires proper leadership, time to train and appropriate pay.