Report finds rough sleeping in London to have risen by 1%

New figures reveal that rough sleeping rose by 1% in London this year.

Homelessness charity St Mungo’s Broadway report ‘Street to Home 2013/14′ has revealed that 6,508 people have been seen rough sleeping in the capital between April 1 2013 and March 31 2014, compared to 6,437 the year before, reports Inside Housing. 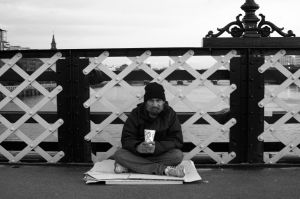 The findings present information from the Combined Homelessness and Information Network (CHAIN), commissioned by the Greater London Authority.

Howard Sinclair, chief executive of St Mungo’s Broadway, said: “Rough sleeping has increased again. Whilst it is a relief that the increase is only 1%, compared with 13% the year before, the fact remains that 6,508 people ended up on the capital’s streets last year. The figures also highlight, however, that almost three quarters of new rough sleepers were only seen sleeping rough once. That highlights that No Second Night Out and other outreach services are working hard to reconnect and help people move in, and on, as quickly as possible. This is no mean feat. The need for responsive, personalised services remains vital, for both anyone newly rough sleeping and people with more of a history of street homelessness.”

Richard Blakeway, deputy mayor for housing, said: “This report reflects the complex challenges faced in tackling rough sleeping. It also shows the effectiveness of the vital services we and others fund to identify and assess rough sleepers and help them access support. Helping people off the streets quickly remains our key priority and the mayor will continue to work with boroughs, government and voluntary sector organisations to get homeless people back into stable accommodation.”